When multiple tasks need to be done on a single CPU, we need to figure out a way to distribute the work done by the CPU across all of the tasks.

At any point there are running, waiting, and blocked threads. A processor’s scheduling policy determines how and when threads transition between these states.

There are three primary goals for an effective scheduling algorithm.

No single scheduling policy can achieve every goal; there must be some tradeoffs. For example, minimizing response time results in more context switching, so throughput cannot also be maximized.

Workload: the input to a scheduling algorithm, which includes the set of tasks to perform, when they arrive, and how long they will take.

Compute-bound tasks primarily use the CPU, whereas IO-bound tasks spend most of their time blocked by IO and only a small amount of time using the CPU.

Preemption is the process of interrupting a running thread to allow for the scheduler to decide which thread runs next.

Priority Inversion occurs when a higher priority thread is blocking on a resource (e.g. a lock) that a lower priority resource holds. This may cause starvation (when a thread waits indefinitely for another).

Deadlock is a specific type of starvation where two or more threads are circularly waiting for each other. For more info, see the section below.

As an example of deadlock, consider two threads with two locks, x and y:

If Thread A acquires x and Thread B acquires y, then neither can run the subsequent line because there is a circular wait: 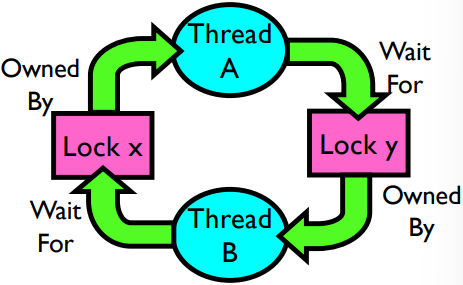 There are four requirements for deadlock to occur:

To avoid deadlock, we can use Banker’s Algorithm to simulate the allocation for resources, and decide if the current available resources is sufficient for completing the current state of the program.

The following policies are primarily concerned with uniprocessor scheduling (how to schedule tasks onto a single CPU).

Also known as First-Come-First-Served (FCFS), this is a very simple scheduling algorithm that runs processes until completion, then chooses the next process on the queue and repeats.

The major drawback with FIFO is that the effectiveness depends on the order that jobs enter the queue: if the short jobs go first, then it works well; however, if long jobs take up all of the CPU time, average waiting time and completion time suffer significantly.

FCFS is prone to starvation because if a task at the front of the queue never yields, then tasks at the back will never run.

In Round Robin scheduling, each process gets a quantum of CPU time (typically 10-100ms). When the quantum expires, the process is preempted and moved to the back of the ready queue. The performance depends on the value of $q$ (the time quantum):

Round Robin is not prone to starvation because it is guaranteed that a process will wait at most $(N - 1) * Q$ time to run, where $N$ is the total number of processes and $Q$ is the length of the quantum.

Individual queues of jobs with the same priority can be processed with another scheduling algorithm (for example, RR).

Another problem is starvation of lower priority jobs that may not ever run due to always being superceded by higher priority tasks.

Some solutions to deadlock and starvation:

If we somehow know how long each job will take, we can schedule the task with the least remaining work first to minimize the average response time.

While this is optimal in terms of response time, in practice it is difficult to know exactly how long something will take.

Additionally, SJF makes starvation more likely (since short tasks may depend on long tasks), and context switches are more frequent.

Although we cannot know exactly how long a job will take, we can predict approximately how long it is:

Another alternative scheduling algorithm is lottery scheduling, where each job is given some number of lottery tickets.

On each time slice, randomly pick a winning job to run. This ensures that CPU time is proportional to the number of tickets given to each job.

Many modern scheduling algorithms are based on a multi-level feedback queue scheduler (MLFQS).

Each queue has a different priority (typically for foreground vs. background tasks), and every queue has its own scheduling algorithm.

When jobs enter the MLFQ, they start in the highest priority queue. If they do not complete before a timeout, then they drop one level; otherwise, they stay at the same level or move up one level if available.

This is a good approximation of SRTF since long CPU-bound tasks will drop to the bottom of the queue.

Mos commercial operating systems use a per-processor data structure, in which each CPU has its own task queue.

To maximize cache reuse, affinity scheduling can be used to prioritize scheduling yielded tasks onto the same CPU.

Rebalancing occurs when the length of a CPU’s queue is long enough to justify moving the task to another CPU.

Spinlocks can be used for multiprocessing when disabling interrupts are insufficient. (Other threads on other CPUs can still run concurrently even if one CPU has interrupts disabled.)

Spinlocks are inefficient for long periods of waiting, but for brief (context switch level of speed) moments we can use this to ensure locks are acquired successfully before continuing.

When multiple threads need to work together for a task, it makes sense to scheduling them together to make spin waiting more efficient. 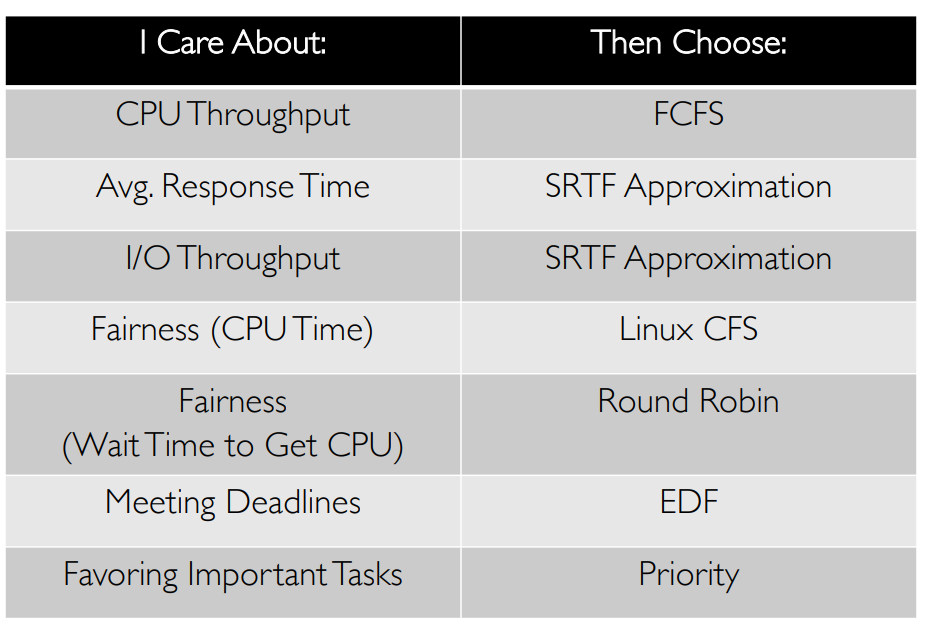