Structured Query Language (/ˈsiːkwəl/) is a highly standardized syntax for performing operations on a database.

SQL databases are a set of named relations, or tables, that describe the relationship between attributes. You can think of attributes as the columns of the table, and each record (also known as a tuple) being one row in the table.

Relations are composed of:

As an example for using this terminology: if we add a column to the table, we can say that “we updated the schema of the relation to include an additional attribute”.

A note on looking up SQL things online #

The SQL syntax and features we cover in this course are known as “standard SQL”, whose specifications can be found here.

In the wild, there are many implementations of SQL (like SQLite, MySQL, MariaDB), which may have an extended feature set or slightly different syntax. We will generally stay away from these extended features, and you do not need to know them for now.

If you’re struggling to find relevant information, I would recommend prepending “sqlite” to the front of your search query (e.g. “sqlite how to create a table”). We use SQLite in Project 1, and for most things it’s safe to assume that the syntax will be what we’re looking for. Read more about SQL vs SQLite here.

You will install sqlite3 in Project 1. Once you’ve installed it, you can run sqlite3 in your terminal to start an interactive session, or run sqlite3 database.db to read from a file named database.db. Once in the session, you can also run .read file.sql to run queries written in the file file.sql, or run .schema to get schema information for the current database.

In a pinch, the CS61A online interpreter also works great, and has a built-in visualizer that’s especially useful for exploring aggregation.

Don’t get too hung up on the syntax, or remembering how to use every small feature of SQL. The language itself is only a small part of this course- for most of our time, we’ll discuss how to actually implement the features you use here.

If you anticipate needing SQL in future work, here’s a nice reference for common keywords and how to use them.

When defining schemas, it’s often important to be able to guarantee that rows are unique so that we can catch duplicate information. For example, if the school had a database of all enrolled students, we wouldn’t want two students to have the same SID!

Primary keys are unique, non-null, and can be used to identify an entry. Many times, adding PRIMARY KEY (id) during table creation is good enough.

In other cases, like the boat reservation tracking example in lecture, we would need more than one attribute (PRIMARY KEY (sid, bid, day)) to guarantee uniqueness, since a boat can be reserved many different times.

Foreign keys reference other tables’ primary keys. Building onto the boat example, the boat ID would be the same as the ID’s in a table of boats, so we could add FOREIGN KEY (bid) REFERENCES Boats to the reserves table instead of copying everything over.

The main purpose of foreign keys is to maintain the uniqueness and non-null constraint of an attribute, since it has to match the primary key of another table.

Below is a screenshot from lecture that puts some code to the example.

Enough with the long complicated words, let’s write some SQL!

Here’s a good list of common data types that you can use. For the purposes of this class we will mostly focus on INT, BOOLEAN, TEXT, CHAR(n), VARCHAR(n), and BYTE. More about what these do in the next section.

There’s more clubs to add! Let’s add one after the table has already been created:

Below is the basic structure of a query:

Aggregation can seem tricky, but the core idea is simple: crunch similar rows into one row, and keep one particularly interersting value.

There are three parts to this:

It’s possible to GROUP BY multiple columns. This will group together every combination of values in those two columns. For example, if we did GROUP BY name, alias, and two clubs Open Computing Facility and Original Cat Friends had the same alias OCF, they would represent two separate groups.

What is the difference between WHERE and HAVING?

Whenever you want to do something that requires the GROUP BY to have been done first, like filter by MAX(members) > 100, it needs to be in the HAVING clause.

Still unsure about querying and aggregation? Here are some of my old 61A discussion slides that have some practice problems (back when we still taught SQL). All of the tables referenced are already preloaded for you in code.cs61a.org.

SQL Queries are typically processed in a different order than they’re written. Here’s the order- try to develop an intuition as to why this order would make more sense to a machine than how queries are usually written:

When writing queries, I often like to follow this order as well since each step builds on the previous one.

A note on aliasing #

One consequence of Logical Processing Order is that we cannot use aliases in WHERE, GROUP BY, or HAVING because they are processed before any alias is defined in SELECT!

For example, SELECT name as clubname WHERE clubname = 'Open Computing Facility' is NOT a valid query in standard SQL.

However, since ORDER BY and LIMIT come afterwards, we are allowed to use aliases there.

If we have two tables and need to access information from both in a query, we will need to join the two tables together!

For this section, we will use the following tables as examples:

By default, if a join (SELECT ... FROM a, b...) is done in SQL without specifying a type, a cross product (Cartesian product) is calculated. Every row in table a (the left table) is combined with every row in table b to create $R_a * R_b$ rows ($R_a$ = number of rows in table a).

In the example below, since clubs had $2$ rows and members had $4$ rows, we should expect the result to have $3 \times 4 = 12$ rows. Note that most of these rows are pretty useless, since there is no correlation between the member and the club they were joined with. 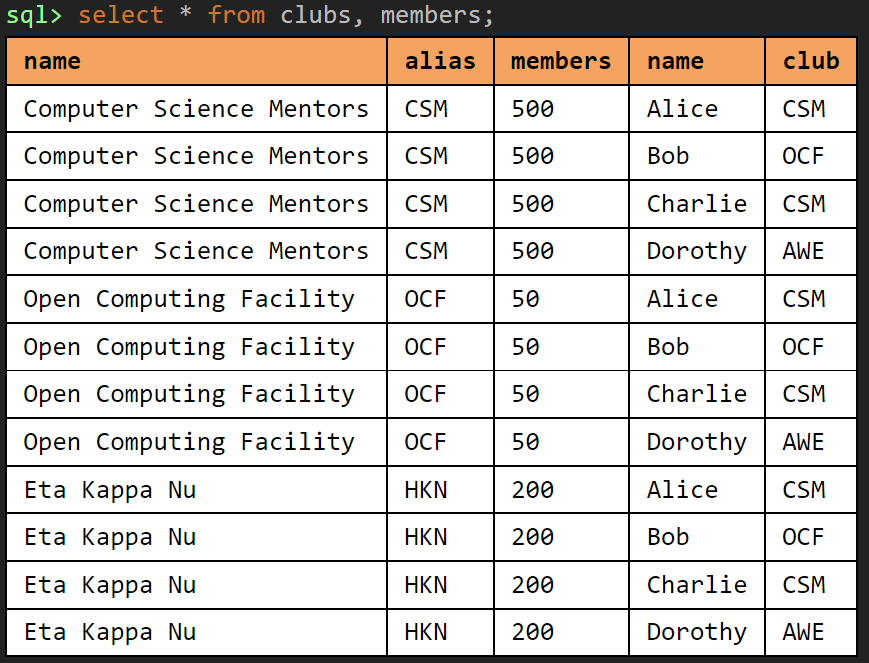 An inner join takes only the rows in which a particular attribute (or list of attributes) can be found in both the left and right tables.

If the columns alias and club were both named the same thing, then SELECT ... FROM a NATURAL JOIN b ... is completely equivalent to the example in the inner join section above. Otherwise, the NATURAL JOIN will return an empty table if no column names are shared (even if the contents are the same).

Left outer joins return all matched rows (as in an inner join), AND additionally preserves all unmatched rows from the left table. Any non-matching fields will be filled in with null values.

A full outer join returns all rows, matched or unmatched, from the tables on both sides of the join clause.

Using the LIKE operator, we can do the following:

The UNION operator combines two queries (like an OR statement).

The INTERSECT operator combines two queries, and discards rows that do not appear in both (like an AND statement).

The EXCEPT operator subtracts one query’s results from another.

UNION, INTERSECT, and EXCEPT operate using set semantics (distinct elements) and will keep only one of each unique element in the result.

Using UNION ALL, INTERSECT ALL, and EXCEPT ALL will manage cardinalities and will add or subtract the number of identical elements accordingly.

A view is a named query. It can be thought of as a temporary table that can be accessed in future queries to make development simpler. Unlike tables, it is not computed immediately, and results are cached when they are needed.

A “view on the fly” can also be created using the WITH keyword: