Parallelism helps us break down a big problem into small, independent chunks. The idea is that a lot of machines all working on the same problem at the same time will finish the problem more quickly.

There are two main metrics we want:

There are two main types of parallelism:

Now for types of query parallelism:

So, if we’re going to do intra-operator parallelism, how do we split up the data in the first place?

Range and hash partitioning are prone to key-skew. Round-robin ensures that all machines receive roughly equal amounts of work regardless of the data distribution.

However, with range and hash partitioning, searching is more efficient since we only need to query a subset of machines. 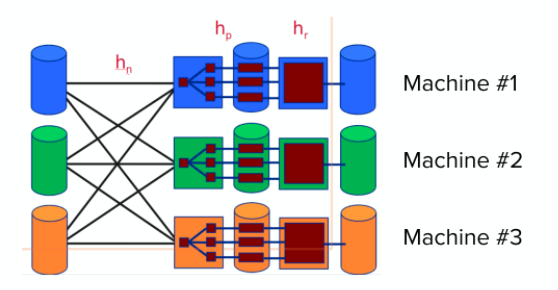 Add a new partitioning phase to separate data into machines before running the algorithm individually for each machine.

Use hash partitioning on both relations, then perform a normal hash join on each machine independently.

Symmetric hash joins are a type of streaming hash join algorithm: it does not require all tuples to be available when it runs.

Partition the data over machines using range partitioning. Then, perform sort-merge join independently on each machine. Since each range is independent, we can join all of them at the end for the final output.

Parallel hashing uses the same idea as parallel sorting, except that since we don’t care about sort order we use hash partitioning instead.

Sometimes, data is already partitioned the way we want. This would make it redundant to repartition or send data.

For example, if we wanted to run sort-merge join on R and S, but R is already range partitioned, then we can leave R alone and range-partition S using the same ranges before performing the merge.

Sometimes, one table is tiny and another one is huge. It can be very expensive to partition the huge table, so we can instead send the entire tiny table to each machine containing the huge table and perform the operation locally.

Here are some examples of parallel operations:

Network cost: amount of data we need to send over the network to perform an operation