A thread is a single unique context, or unit of concurrency, for execution that fully describes the program state. A thread consists of a program counter (PC), registers, execution flags, and a stack.

Each thread has a private state stored in the Thread Control Block (TCB). Additionally, each thread has a dedicated portion of the stack that is isolated from other threads: 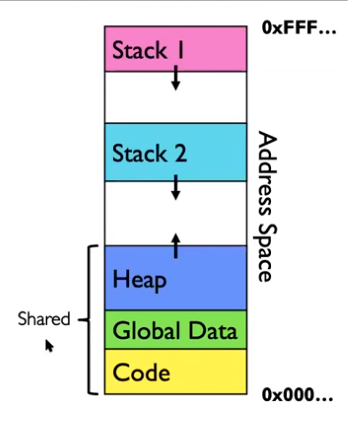 Operating systems have a thread scheduler that manages multiple threads, and can switch between ready and running threads. Threads can have one of several states: 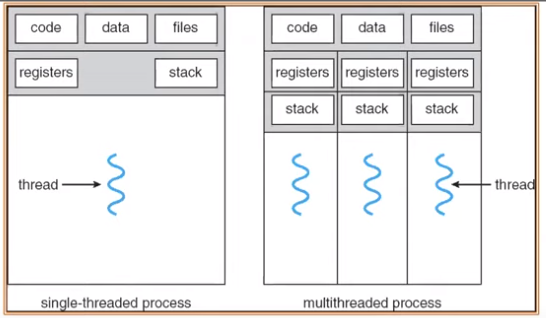 By default, C programs are single-threaded (and when you create a new process, it only has one thread). 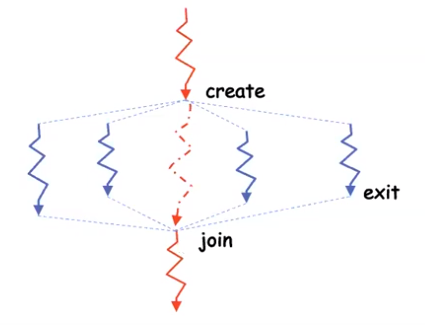 The function int pthread_join(pthread_t thread, void **retval) can be used to join an existing thread back to the main thread. Calling this function will do the following:

If a child thread is complete, int pthread_exit(void *retval) can be called to terminate the thread early and return a result.

A context switch can be forced using pthread_yield, which causes the thread to relinquish the CPU and get placed at the end of the run queue.

Threads run in a nondeterministic order, so we must be careful to join them at the correct time. Here’s what happens if we don’t:

The above code could have multiple outcomes based on the order of thread execution:

If multiple threads need to modify the same variable at the same time, then locking is required (this will be discussed further in the Concurrency section).