For this reason, it’s very important that we try to optimize the join operation as much as possible, such that we can minimize the amount of data to process. In this section, we’ll explore a methods of doing this, and compare their runtimes.

I would recommend playing around with the Loop Join Animations visualizer I made- it will help provide some intuition for the first few joins since staring at an algorithm isn’t for everyone!

The discussion slides also have a full walkthrough of the more involved joins (SMJ, GHJ).

Make sure you keep this section around (whether it’s in your head, or bookmarked)! It’ll be extremely useful for this section.

Intuitively, joining two tables is essentially a double for loop over the records in each table:

where join_condition is an optional function, also known as $\theta$, that returns a boolean (true if record should be added to result).

Simple join is inefficient because it requires an I/O for every individual record for both tables.

We can improve this by operating on the page level rather than the record level: before moving onto the next page, process all of the joins for the records on the current page.

To improve upon loop join even further, let’s take advantage of the fact that we can have $B$ pages in our buffer.

Rather than having to load in one page at a time, we can instead load in:

In previous version of nested loop join, we’d need to loop through all of the elements in order to join them.

However, with the power of B+ trees, we can quickly look up tuples that are equivalent in the two tables when computing an equijoin.

Main idea: When joining on a comparison (like equality or $<$), sort on the desired indices first, then for every range (group of values with identical indices) check for matches and yield all matches. 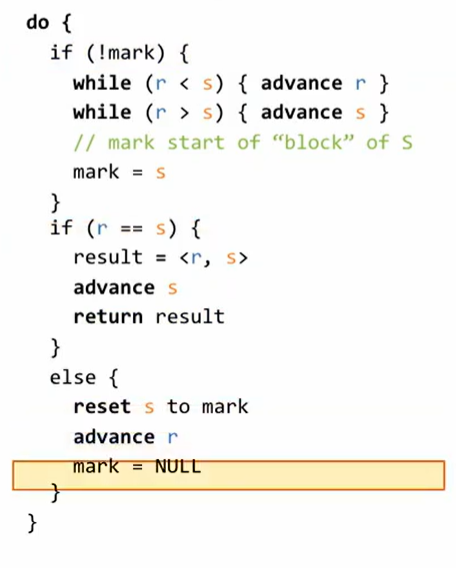 The cost of sort-merge join is the sum of:

One optimization we can make is to stream both relations directly into the merge part when in the last pass of sorting! This will reduce the I/O cost by removing the need to write and re-read $[R] + [S]$. This subtracts $2 \times ([R] + [S])$ I/Os from the final cost.

If we have an equality predicate, we can use the power of hashing to match identical indices quickly.

Naively, if we load all records in table $R$ into a hash table, we can scan $S$ once and probe the hash table for matches- but this requires $R$ to be less than $(B-2) \times H$ where $H$ is the hash fill factor.

If the memory requirement of $R < (B-2) * H$ is not satisfied, we will have to partition out $R$ and process each group separately.

Essentially, Grace Hash Join is very similar to the divide-and-conquer approach for hashing in the first place:

Calculating the I/O Cost of GHJ #

The process of calculating the GHJ cost is extremely similar to that of standard external hashing. The main difference is that we are now loading in two tables at the same time.

Let’s look at the example from Discussion 6:

Like hashing, our goal is to make the partitions small enough to fit in the buffer. But now that we have two tables, we only need one of them to fit! This is because we can put the smaller table into memory, then stream the larger table in one page at a time using one buffer frame.

As you can see in the image above, as long as one of the tables fits in $B-2$ pages, we’re all set for the Build and Probe stage.

The partition cost calculation is the same as for hashing. However, we must partition both tables separately using $B-1$ partitions each at each step.