What is a transaction? #

Transactions are collections of operations that can be treated like a single unit. The primary reason why we need transactions is to obey the ACID properties:

As previously mentioned, transactions must be treated like a single unit, even if they are actually made up of many smaller operations. However, it’s often inefficient to only run one transaction at a time– whenever a transaction tries to read something from the disk, we can start running another transaction while waiting for the data to be retrieved.

Formally, Two schedules are equivalent if: 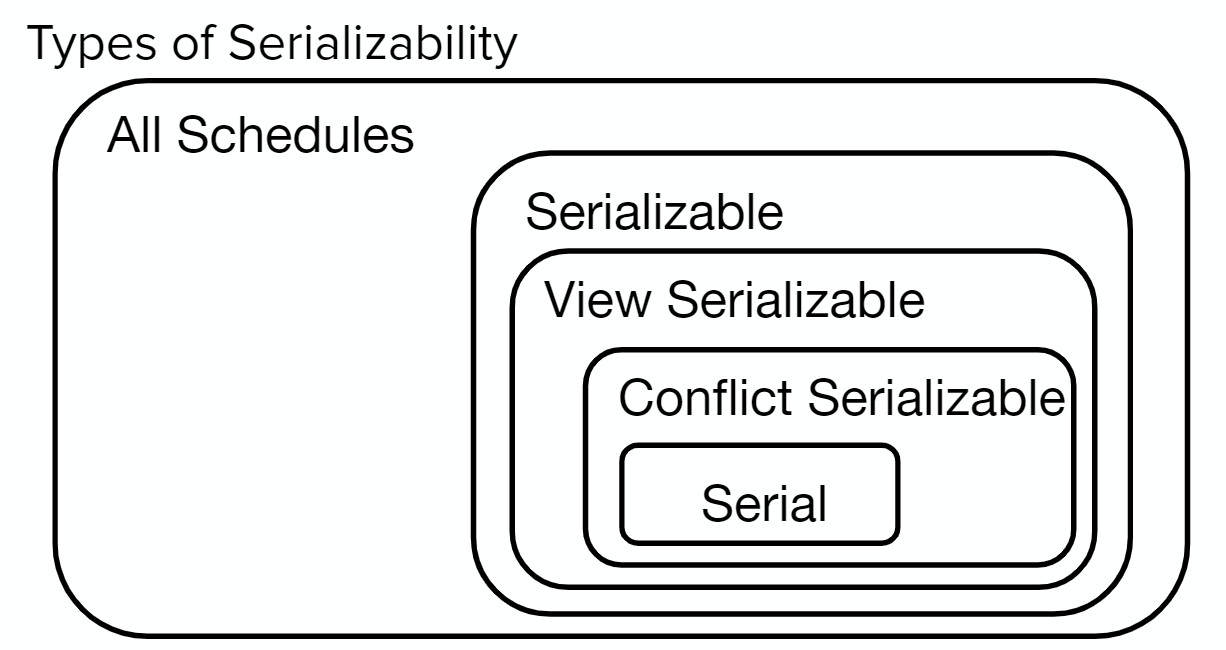 To draw a conflict dependency graph for a schedule, represent each transaction as a node. Then, draw an arrow from an earlier operation to a later operation if the two operations are done in different transactions, and at least one of the operations was a write.

If two transactions need to access the same data, we need a way to guarantee isolation! The solution is for a transaction to lock a resource if it needs access to it. Then, other transactions should wait until the lock is released before accessing the same resource.

A transaction may lock a resource in two primary ways:

Here’s the lock compatibility matrix for S and X locks:

2PL is one method of enforcing conflict serializability.

There are two phases:

Transactions cannot acquire any lock after it has released a lock.

Strict 2PL only allows releasing of locks at the end of the transaction. This avoids cascading aborts (when unrelated transactions are aborted due to lock release schedule).

Deadlock occurs when there is a cycle of transactions all waiting for each other to release their locks.

Deadlock avoidance is the process of catching deadlocks before they occur. There are two main ways we can avoid deadlock:

Deadlock detection refers to the process of detecting and resolving deadlocks when they occur.

To perform deadlock detection, we can draw a waits-for graph: 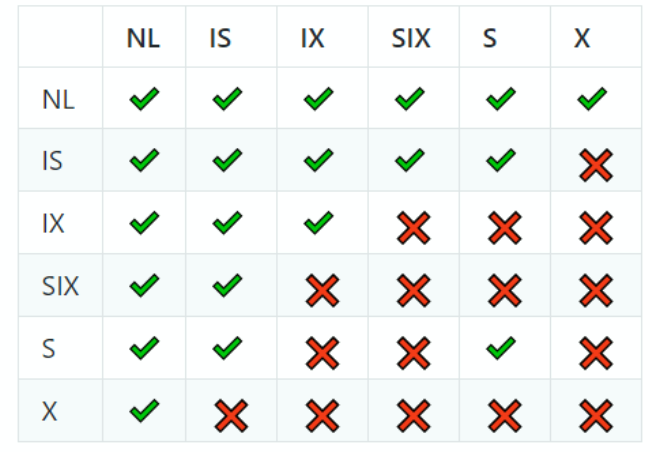 (Fall 2022 MT2) Draw the conflict dependency graph for the following schedule. Is this schedule conflict serializable?

To draw the conflict dependency graph, remember the rule of drawing an arrow from an earlier operation to a later operation if the two operations are in different transactions and at least one of them was a write:

Then, we compress all of the arrows into their corresponding transactions, resulting in the following graph: 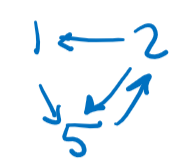 Since there is a cycle from T2 to T5, this schedule is not conflict serializable.

(Spring 2022 MT2) Suppose we wanted to read the entire Page 1. What locks should we hold on each layer after granting the lock?

Here is the original state:

Right now, we can’t read Page 1 since we don’t have an S lock on it. Therefore, we need to promote the IX lock on Page 1 into an SIX lock.

Since an S lock exists on Page 1 now, Tuple 1 can release its S lock (no S in S descendants).

Everything else remains the same, so the following locks will be held: